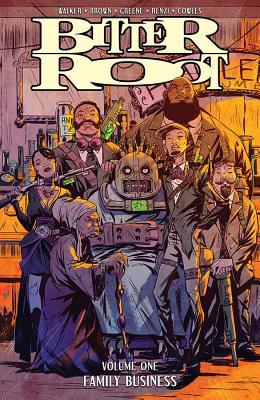 I’m really glad I picked this one up. The mystery being investigated in the book is pretty standard fare, but the worldbuilding!

Meaney has created a society that runs on bones – all of the energy in Tristopolis comes from a necrofusion center where the bones of tortured souls are fuel. Bound spirits also exist in everything else: furniture, elevators, cars… you name it and there’s likely someone’s soul inhabiting it. As you might guess, some people treat those spirits better than others, like Detective Lieutenant Donal Riordan, who is friendly with the guy at HQ’s front desk – or rather the guy who is HQ’s front desk, the huge police wolves, the #7 elevator, and even zombies.

Riordan’s world is a dark one literally – the sky is always dark purple in his city – and figuratively – only the really wealthy are able to bury their dead in catacombs; everyone else is fuel. There’s the usual class divide and corruption, but now something new has been added: bone collectors. These people don’t want to wait until an artist or performer dies to bid on the memories their bones hold. Instead, they’ve created a conspiracy to kill them before their time and steal the bones.

In trying to stop them, Riordan will join a special task force headed up by a beautiful zombie, become friends with some of the most respected forensic bone listeners, and fight against powerful dark mages.

I was so enthralled by the world Riordan lives in that I bought the sequel, Dark Blood the same night I finished reading Bone Song. Fascinating world, interesting characters.

View all my reviews